View More in Gallery...
Home » Snacks » Chilli Paneer
इस रेसिपी को हिन्दी में पढ़े
Hot and spicy chilli paneer prepared with this step by step photos recipe is delicious delight anytime. Whether served as starter or served as side dish with Chinese fried rice or schezwan fried rice, it’s definitely going to leave your taste buds wanting for more. This recipe is for preparing dry Chinese paneer chilly. It uses and recommends deep-frying of marinated paneer cubes for best taste but you can follow tips mentioned below to use shallow fry technique and make it a healthy dish. 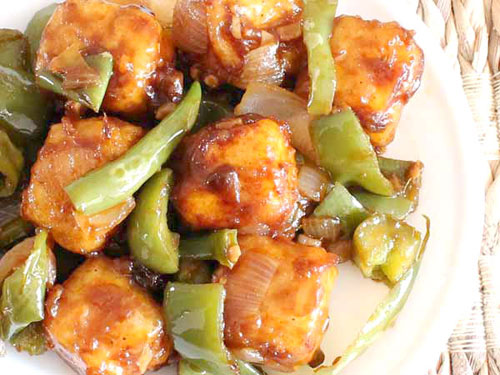 Jun 13, 2019 by Nafeesa
Salam aleykum..
Thanks for the great recipe. Looked and tasted like paneer Manchurian :) had added some more water for gravy :)
May 14, 2019 by Gagan Aulakh
Good recipes to learn and in brief, I really like it.
Oct 13, 2018 by Harsha
It was very tasty. My husband said little more gravy will add more taste.
What to do to add more gravy? Can I use more cornflour?
Thanks.

Jun 07, 2017 by Jagdish
I made chilli paneer as your recipe and it was delicious and mouth watering. Thanks.
Feb 07, 2017 by Shikha
Yummy recipes..I tried it at my home.
Dec 10, 2015 by Hemlata
This recipe was too good ..but can we use potato instead of paneer for chilli potato.

Response: Yes, you can use sliced potato instead of paneer.

Thanks thanks .
Sep 12, 2015 by Ashish Suneja
Hi, I wanted to ask that why didn't you mentioned ajinomoto in your recipe ?

Response: Ajinomoto is not goof for health, that's why we have not added in our recipe.

Aug 01, 2015 by Ruchika
Instead of cornflour what should be used to make cheese crispy?

Response: Hi Ruchika, you cannot use anything else instead of cornflour (corn starch) in this recipe.

Response: Hi Sandy, corn flour is used to make outer layer crispy, you cannot use besan instead of it.

Jul 11, 2015 by Diwakar Dev Sharma
In very short time I have got really delicious recepie.
Jun 24, 2015 by Gurmeet Kaur
Your chili paneer dish, I tried at my home, it was very tasty.
Jun 14, 2015 by Palak
Hi, I tried. It was yummy but after putting sauce it became dark brown in colour. What to do?

Jun 12, 2015 by Srishti
It was really yummy.
Thanks for your yummy recipe.
Jun 02, 2015 by Kriti Gupta
My first experience to make this and it was awesome.
May 23, 2015 by Shalini
This recipe is very good but my paneer was not getting a proper and thick coating and when I was frying them, they were sticking with each other.

Response: Hi Shalini, thanks for trying the recipe. Mix the batter properly after marination (just before deep frying) to get thick coating and put paneer cubes in hot oil one after another (keeping enough space between them) to prevent them sticking with each other.

Response: Sure Preeti, we will definitely post the recipe with gravy very soon.

Response: Hi Nisha, it is ready made tomato ketchup.

Jan 04, 2015 by Raveesha
It was just mouth watering.
Tried so many sites, but this one turned out the best.
I am glad I found it. Will be trying other things as well.

Oct 20, 2014 by Kishor Manji
Hi guys
This will be the next dish I'll be trying out, it looks great.
Tip: after I fry the paneer, I put them straight into a bowl of warm water for 5-10 mins. This stops it from drying out. Works with both shop bought and home made paneer.

Response: Yes Kishor, you can apply this trick in most of the paneer curries but in this recipe we deep fry the paneer cubes to make them crispy so no need to soak them in water. By the way,

Sep 22, 2014 by annapurna
Very good. I love paneer. Nice recipe.Thank you.
Sep 21, 2014 by khushi
Thank u so much for too much delicious recipes. I want to confirm that corn flour here means makki ka atta?

Response: Hi Khushi, corn flour means corn starch (white color) in this recipe and other manchurian recipes on this website. Makii ka atta is different from the corn flour/starch. You can easily find the corn flour in any grocery store.

Sep 18, 2014 by mamta
I made this but unfortunately my paneer cubes were very hard after frying...i love this recipe but....i was not able to make it perfect :
:-(

Response: Hi Mamta, did you use the homemade paneer or store bought paneer? Was the paneer soft before deep frying? I think something was wrong with the paneer you used. Fry the paneer cubes on medium flame to prevent them turning hard.

Jul 30, 2012 by Lisa Zara
Very tempting and delicious too. i used red chill sauce to make it spicier and it was well worth the change. However, i missed the photos in the print friendly version.