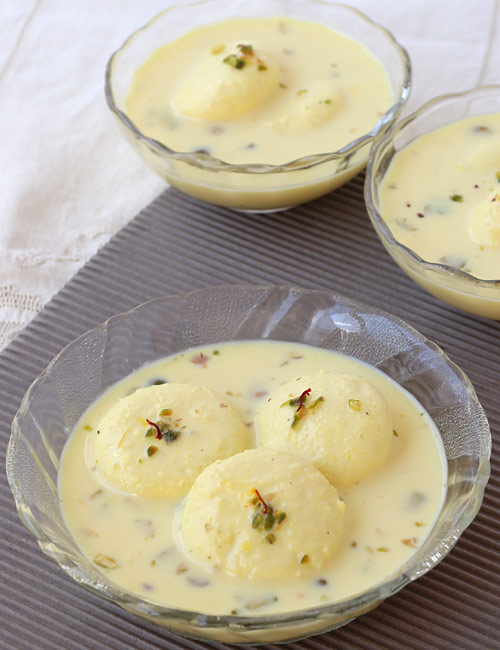 Jan 19, 2021 by Anjali
Can we see the inside of the balls please? Like a photo of one cut in half so we can see the structure inside?

Response: Hi Anjali, I will upload the photo when I make it next time.

Response: Hello Shilpa, I have never tried making rasmalai using milk powder so I'm not sure about that.

Oct 28, 2017 by Navjeet Saggu
Hello there, I have tried most of your recipes, they all turned out great. I just made the ras malai first the first time, it looks great, I will be trying it tomorrow with some friends and family. It looks really good, so, i can’t wait. Thank you.
Jul 06, 2017 by Anshul
Hi, Its a very nice recipe, but when I made it the rasmalai was greasy, leaving a coat of ghee on tongue. Please suggest.

Response: Don't knead the chenna too much to prevent rasmalai from turning greasy.

Jan 13, 2017 by Meenu
Thanks for the delicious receipe. I tried this. My rasgullas were soft and spongy at room temp but when I kept in refrigerator they turned hard. Tried 2-3 times but happened the same. Please guide me.

Response: Hello Meenu, follow the given tips to prevent rasgullas from turning hard.
1. Keep the rasgullas in a container in the refrigerator.
2. Remove them from the refrigerator at least 30 minutes before serving.

Aug 17, 2016 by Zeeshan
Very nicely explained. I tried for first time and the taste was good but my paneer patties broke. Only 4 were good others got dissolved. What could be the reason?

Response: Thank you Zeeshan for trying the recipe. It happens if the chenna is too wet (excess moisture).

Jul 17, 2016 by Mr khera
I love rasmalai but my patties were hard. I don't know why it was like this and the rabri goes on consistent so plz help me out.

Response: Thank you Mr Khera for trying the recipe. The main reason behind hard rasmalai is the dry chenna. If the chenna has not enough moisture, the rasmalai will turn hard.

Jul 05, 2016 by Mr khera
Awesome explanation of the recipe.
It was very yummy as I tried it for the first time really very delicious.
Jun 18, 2016 by Bina
My husband loves rasmalai and was very worried that the cheese balls will break when boiling in the hot sugar syrup. Thankfully it didn't. Will make a bigger batch tomorrow. He's in for a treat. Thank you for showing us step by step.
Apr 15, 2016 by Sonia
Thank you thank you thank you so much. You explained the recipe so well. I tried rassmalai first time and it came out so well.

Response: Hi Sonia, glad to hear that it turned out well.

Mar 04, 2016 by Ankita
I love rasmalai but my patties are soft in touch and also in taste. GILGILI kind of. Can you tell me the reason why patties are flabby instead of SPONGEY?

Response: Hi Ankita, it happens if the chhena has excess moisture or they are not cooked enough. When you try next time, if it looks like chenna has too much moisture, press it between papaer napkin to get rid of excess moisture.