Home » Punjabi » Makki Ki Roti
हिन्दीગુજરાતી
Jump To Recipe Ingredients Tips
It is a popular punjabi flat bread made from corn flour and generally served with sarson da saag. Makki is a Punjabi word for maize (corn) and a yellow flour made from it is the base ingredient for this recipe. Traditionally make ki roti is prepared by flattening a dough ball into round shape by repeatedly pressing it in-between palms in a thumping motion and then baked on hot tawa. However, this traditional method is difficult and requires some practice, so this step by step photo recipe uses easier rolling pin method. However, This unleavened Indian style bread is not easy to roll as maize flour contains very less amount of gluten and sticks a lot. To overcome this problem, a plastic sheet technique is used that allows you to roll it easily. In addition to this technique, this makki ki roti recipe uses coriander leaves and carom seeds which add nice flavory touch to its crisp texture. 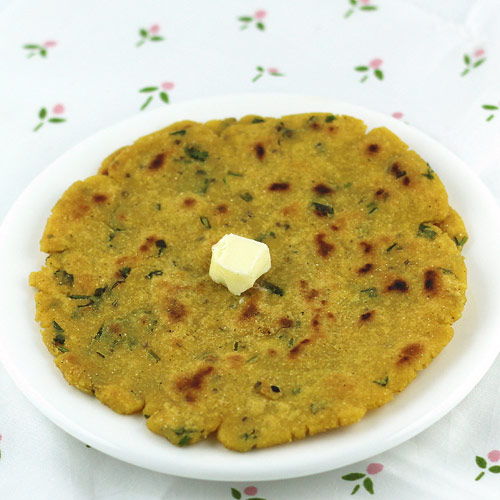 Preparation Time: 5 minutes
Cooking Time: 15 minutes
Serves: 2 servings (6 roti)
Print Recipe
Cooking Measurements
Makki Ki Roti Recipe In Hindi (हिन्दी में पढ़े)
Makki Ki Roti Recipe In Gujarati (ગુજરાતી માં વાંચો)
Note: Makai Atta (makki ka aata or corn flour) is made by grounding corn kernels into fine powder and it has yellow color. Do not use the corn meal which has a grainy texture like semolina. Also, do not use white corn flour which is similar to starch and generally used for thickening the soup and gravy.
Directions:
Tips and Variations:
Taste:  Light crispy
Serving Ideas:  Serve makki ki roti with sarson ka saag or saag paneer and a glass of lassi in dinner. It can also be served with tea in the breakfast.

Jan 29, 2020 by Parsan Narang
Recipe of Maki roti made simple. Tried it and the turned out well.
Jan 28, 2020 by jarnail kamal
I am Punjabi. I love roti with saag. Thanks.
Jun 10, 2017 by Shekar G
Tried this recipe- turned out absolutely great. The author has made a difficult to make roti very simple. The idea to use a plastic ziplock bag to roll is brilliant- Previously I could never make the corn roti in one piece and this came out perfect. Thanks for the great technique. Great site
Sep 18, 2016 by Joe nazareth
Recipes are well explained in easy steps. Nice work.
Mar 18, 2016 by Upasana
After long have found nice food site. Great recipes with great description..keep it up.